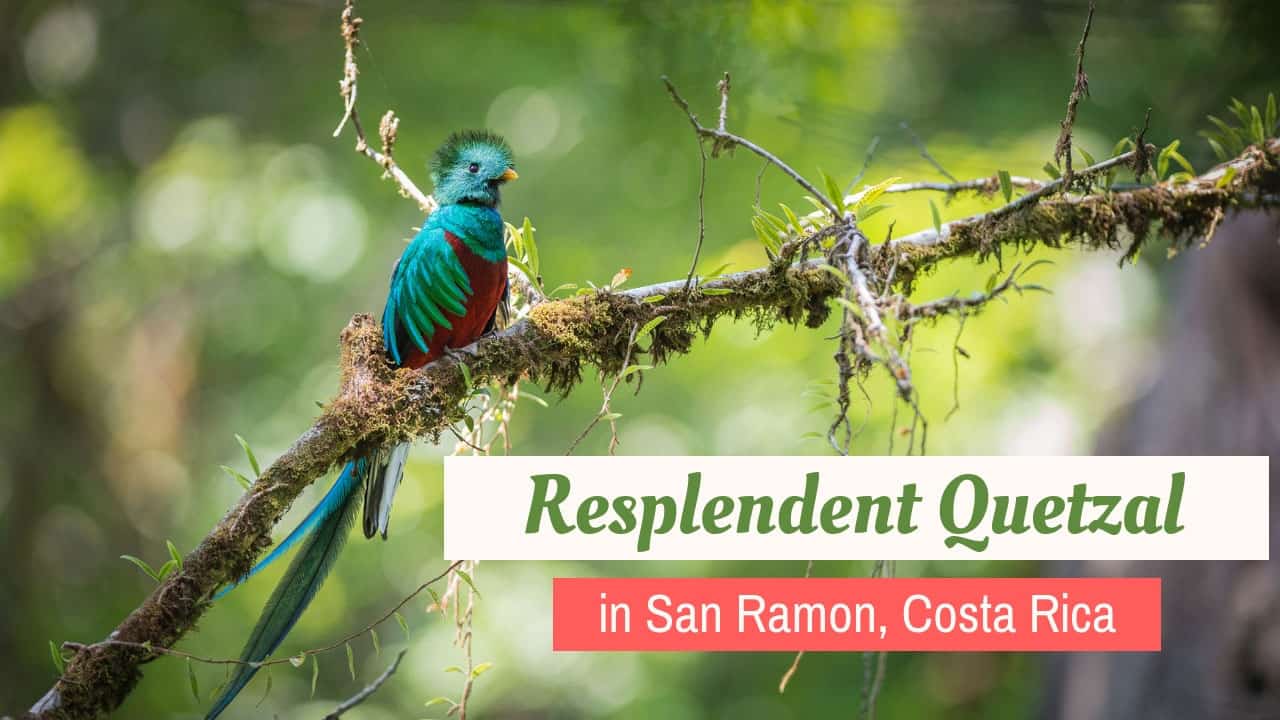 I didn’t know for a long time that I (Ligia) lived so close to them … they nest every year in the cloud forest that is 40 minutes away from our house.

Yes, I discovered the legendary resplendent quetzal, while I was doing research for a university project and realized that he was at the top of every naturalist´s must-see-list.

While I started working in tourism people, talk about how much tourists want to see him, but I didn’t understand this rare obsession with a bird until I started practicing more hiking and birdwatching.

Well, the Resplendent Quetzal capture your attention as soon as you have in front your eyes.

It was bigger than I expected, bright colors and I was surprised to feel so impressed by him!

Now, I understand why the bird was sacred to the ancient Maya and Aztec peoples.

Why do resplendent quetzals are favorite birds?

According to National Geographic article:

The resplendent quetzal is an aptly named bird that many consider among the world’s most beautiful.

They are favorite birds for ecotourists and bird watchers here in Costa Rica.

Also in Guatemala, the quetzal is their National Bird, having it on their flag. Their currency also is called “Quetzal” and “Quetzales” in plural.

Let’s have a closer look at this vibrantly colored animal:

DESCRIPTION: The male is easy to recognize, due to its hull-shaped crest (punk head) that extends forward to cover the base of the beak (bright yellow by the way). In addition to its long tail.

The female and the juveniles do not have a crest but have a tail with distinctive stripes and a gray breast.

Historically were seen as Mayans chiefs, as spiritual protectors and also represent a tremendous cultural pride for the countries they call home like Costa Rica.

These type of trogon is one of the most dazzling and culturally significant bird in Central America.

For their beauty and also what they represent for the tropical forest, historically and biologically, we can consider the quetzal as the top of favorite birds.

Is it worth to see the Resplendent Quetzal in San Ramon?

The answer will be definitely: YES! Here are some reasons why:

Close to San Jose: Seeing this bird is almost everyone’s primary goal in visiting the cloud forest. People usually think in Monteverde to Cloud Forest, but there are other parts where you can see the Resplendent Quetzal like San Ramon because have Cloud Forest also. You can do a one day tour if you are short time!

If you are going to La Fortuna or decide to stay your first night here and are in the mating season of the quetzal, why not give a try?

The breeding season (and best viewing): In Costa Rica usually happens between mid-February until June can be extended July. Traditionally related with the season of the trees that have the fruits that they eat. They elaborate the nest with a similar cavity like woodpeckers and usually lay two eggs (light blue color) per nest.

Not many tourist = more chances: We can guarantee you since this is not a famous spot (yet),  this is one our favorite places in Costa Rica to spot quetzals in uncrowded and beautiful surroundings plus the owners of the spot sites help you a lot to find them (highly recommended).

Support of the local economy:  I know you will hear us saying this a long the blog. However, the guides are locals who own the land and decided to protect it because they understood the value of having species like Quetzals. So they will have identified the nesting trees, and for a fee, you will have more chances to appreciated and photograph these beautiful birds.

In addition to its aesthetic beauty, quetzals are due to their role as seed dispersers and as indicators of environmental degradation due to their apparent habitat specificity (Espinosa de Los Monteros Solis, A., 2001).

These guys are lovers of wild avocado trees (“Aguacatillos”), I understand them I LOVE AVOCADO, well I know their avocado is different, and other fruit from trees in the laurel family (Lauraceae) .
Something interesting about them is they have physical adaptation eat fruits with larger seeds.

In other words, the esophagus has an elastic, thin wall with rings of circular muscles that wheis likely to facilitate with the regurgitation of large seeds or pits. They can be perched in a branch for 25 minutes not moving, just digesting.

Their warning is described as –; their calls made in flight or when agitated as a sharp crackling “.”
The song: Rendered as ––-k’loo-– or  or sounding like “a whimpering pup.” During the breeding season, he vocalizes to attract females, and his song is reminiscent of ” very-good very-good.

Other places to see resplendent quetzal in Costa Rica.

Famous in the world for the Cloud Forests, ziplining and hanging bridges. The tourism billed the area as the place where you can see the most famous bird of the cloud forest, the Resplendent Quetzal.

During the peak of the season around a thousand day are practically guaranteed sightings. Monteverde is in the North Central Region.

We realized that Bird-watchers from around the world come to this small mountain town since the area attracts high-altitude species.

With fresh mountain air, this area is an example of sustainable tourism, no big hotels, mostly owned by families who know the best spots to observe the fabled Maya bird.

The town is located next to Los Quetzales National Park.  The area around San Gerardo is full of private hiking trails that are next to the National Park.

In 2005, the government of Costa Rica created a National Park in honor and also to protect such a celebrity, the elusive resplendent quetzal.

The area is full of bird-life, the quetzal is one of the many species that you can see there. Unfortunately, the park doesn’t have any facilities for tourist, asides the ranger station and restroom. You can read more about our visit to Los Quetzales National Park.

Another National Park that host the Misty Cloud Forest is the Barva Volcano. We hear the Quetzal around February, definitely since is a conservation area the population of quetzals is in this area.

Not as popular like the other areas this National Park offers the possibility to do a one day tour also from San José and Heredia while at the same time is protecting the water resources for the city.

Learn how to visit this National Park and kill two birds with one stone, not literally obviously, what I mean is visit a volcano with the chance to watch the resplendent quetzal.

We hosted a tour for a NatGeo in San Ramon.

Well, life sometimes surprises us, and as I said before, we have the quetzal in our hometown.

We started hosting this tour for birdwatchers or people that are looking for a less touristy spot to observe the quetzal.

Since we have a good relationship with the owners of “Valle Los Quetzales,” the project where I did my final project for university and as a local tour guides visit this place is easy for us.

We had a guided experience with a group of birdwatchers, including a NatGeo explorer in the group. The trip was a success, and pretty cool pictures were shooted that day. Like this one:

Want a to experience a birdwatching tour with us?

We can put in the right direction and help you to photograph the Resplendent Quetzal in less thick cloud forest while you are supporting the locals to preserve it.

So if you are coming here between February until June/July add the Resplendent Quetzal in your things to do here.

You can get more details about this experience clicking “Start planning your trip”, we love that people experience nature at the same time supporting the community. You won´t regret it!

If you are reading this, it's probably because you either are planning a trip to the Poas Volcano or …