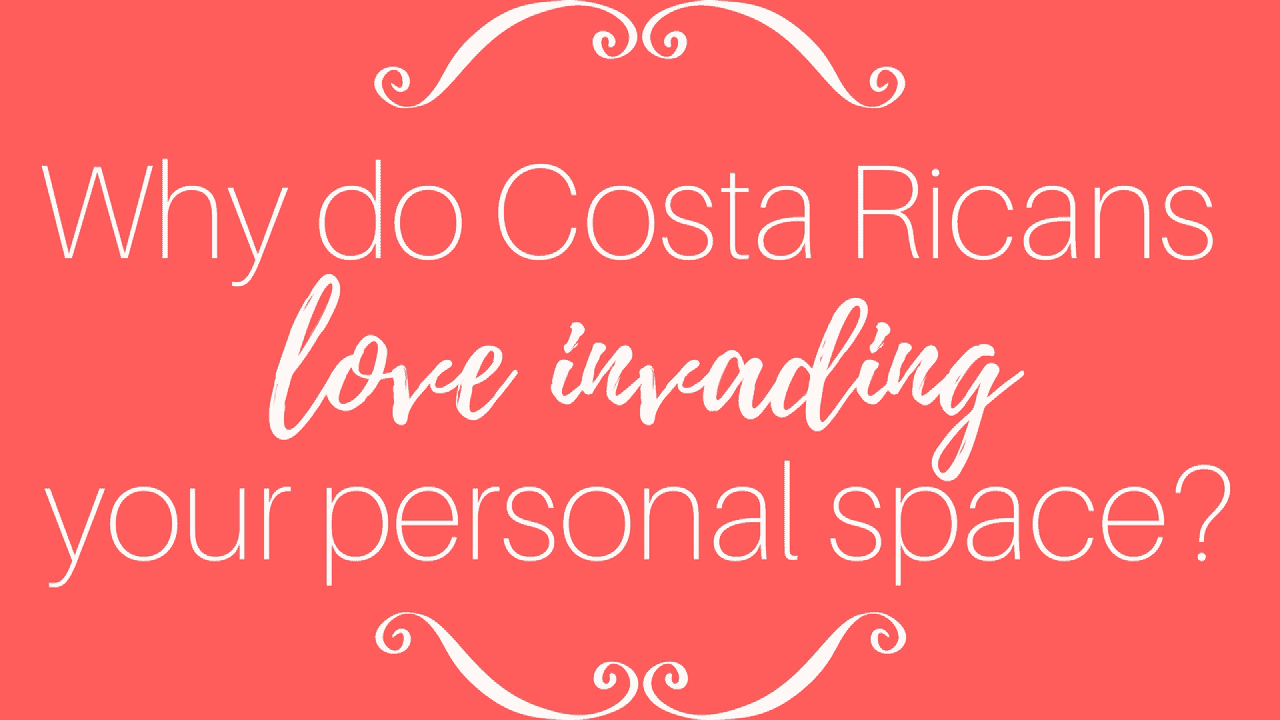 Alright! Every new post I am getting more fascinated by the topics of non-verbal communication and cultures.

I love thinking about Costa Rican customs a little deeper, but don’t worry: I won’t get to the point of an academic/scientific research article.

**Now I have my coworkers saying that I always find a theory to explain cultural aspects (I am probably driving them crazy during lunch, haha).

Well, this probably gives you an idea of the passion I feel for this topic… So here is what I found about personal space in Costa Rica and other cultures. It is called: Proxemics…. Pro? What!?

Don’t worry, let me explain: Proxemics is the name of the study that explains how people treat their space and other people in their proximity. It’s a subcategory of our nonverbal communication.

While this may sound obvious or irrelevant, do you ever think about how you move around others?

How far do you stand from someone else when talking with him\her? Or why do you choose a certain seat and not some other?

It’s not a random decision. People have a deeply integrated, subtle code when it comes to personal space and territory.

While you don’t actually measure the exact distance, you somehow just know it’s the right distance.

What is the right distance?

Proxemics was coined by anthropologist Edward T Hall. He pointed out the different categories of the distance of space around the body. It varies according to cultures since each culture structures its physical space differently. Depending on what you think of as “personal space,” this space can be invaded.

I read an article called: “An Intro to the Strange Costa Rican Culture,” and basically the author was talking about Costa Rica and our lack of personal space. She mentioned something like this:

Someone might come and sit touching you with their bags or their kids hanging off of their lap onto you and no one will look at this as if it’s some funny scene. If you are standing on a bus, you will feel people leaning all of their weight on you.

And a couple of memories came to my mind like when you travel by bus here:

But I know you can experience this awkward situation in public transportation around the world.

So the “right” distance is usually the socially acceptable one for interactions among acquaintances or speaking to a stranger. In most cultures, people don’t like to stand closer than about 3 or 4 feet away from someone they just met.

In Costa Rica, however, Ticos are comfortable using the “personal” distance of  1.5 to 2.5 feet (46 to 76 cm), even with people that we just met, treating them like friends and family.

I don’t doubt that is linked to the fact that I talked about in another blog post: we are a very hospitable culture. Costa Ricans want to be friendly, and we forget that not all cultures feel comfortable with that invasion of personal space.

Ticos love to touch, embrace, shake hands, or stand close to one another. We hug and stand close to people quickly, so some people might think that two Ticos have known each other for a very long time even if they have just met.

People typically greet one another with a kiss on the cheek, and they may touch each other’s arms during conversation. This is used in formal and informal contexts around the country.

Some visitors feel uncomfortable with how touchy Costa Ricans can be. But not everyone dislikes this Costa Rican invasion of personal space.

A volunteer from England once told me how he didn’t expect his host mom to welcome him with a big hug and a kiss as if they had known each other for a long time.

He asked himself what happen to his personal space. But far from feeling uncomfortable, he loved it because it made him feel welcome and like part of the family.

In the days after he first arrived in Costa Rica, people at the projects and other locals that he met kept doing the same a little less intense, but always warmly.

At first, he didn’t  know how to put his face to receive the kiss on the cheek. It was funny to see.

In the end, he just adopted it as part of his experience and left the country as the happiest person. He said he wanted to make a store in England where the people provide kisses and hugs because he said it makes a deeper connection with the country and the people.

So …Why do Costa Ricans invade personal space?

This was my Aha moment!

It simply goes back to the fact that we are high-contact culture. The value of personal interactions and nonverbal communications is just different here than it is in other places.

These cultures usually keep small distances among themselves.

Low-contact cultures who “stand further apart,” include the:

Don’t let these stereotypes affect your judgment of other cultures either. Like Einstein said, “it’s all relative.” If you come from a “warmer” culture, for example, some cultures may seem distant—but only for you. Among themselves, Latin Americans feel natural and “OK” with their personal space.

So when arriving in a foreign country, it would be smart to adjust yourself to the cultural codes of personal space—it will serve you better in creating good connections if you know what body language is normal and friendly and what is considered rude.

7 things you must understand about Costa Rican culture

The 3 most frustrating facts about Costa Rica culture