If you are traveling to Costa Rica, you need to know that the currency is colones (₡). The name of the currency came in 1896 in honor of Cristobal Colón (Christopher Columbus).

Cocoa was our first currency, used back in the pre-Columbian time. After that, we called our currency pesos, and later it became colones, its current name.

You can use US dollars almost everywhere in Costa Rica. It is rare that someone says no. However, even if you pay in dollars, you will receive your change in colones.

Travel tip: When a price is given in dollars, it could be a little more expensive than when it is charged in colones. So even when it is more work, people sometimes prefer to change dollars and pay in colones. Also, it’s important to know that most of the time supermarkets or commercial business (like souvenirs, restaurants or others) won’t accept $50 or $100 dollars bill.

The currency exchange rate fluctuates every day. In recent years, the value of $1 USD is usually around ₡500 up to ₡575.

Also, we recommend you download an app that helps you to do the conversion so you make sure people are doing the right exchange rate for you. People have recommended using this app: XE Currency Apps

Costa Rican bills are really colorful. People like the fact that we have wildlife images on every denomination. Also, our coins are organized by size according to the value. The smallest is our ₡5 colones and the biggest is ₡500.

The “new family” of bills, as they are called, represent the natural ecosystems of the country. The Central Bank of Costa Rica mentioned: “They are a singular sample of the natural wealth that has placed Costa Rica on the world map as a country in which biodiversity and interest in nature is part of their identity.” Click on each bill to know what ecosystem they represent, also the approximate amount they represent in dollars (based on $1 being ₡500). 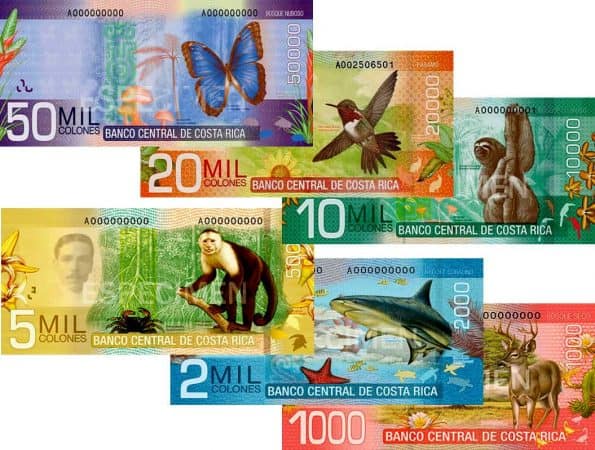 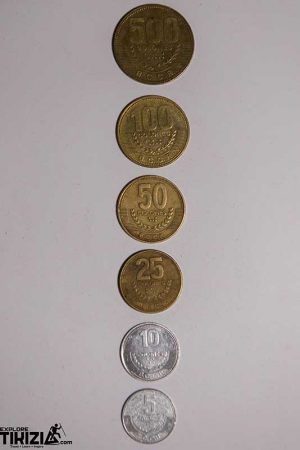 Banks and ATMs in Costa Rica

Around the 15th and 30th of every month, banks are more crowded because people receive their paycheck on those days. Keep this in mind when you have to visit the bank. If you only use the ATMs, you will not be bothered by this.

ATMs are everywhere. In the main tourist areas, you will see the main branches of banks (BCR, Banco Nacional, Banco Popular).

So what we recommend is 1) Avoid changing money at the airport. Wait until you go to an ATM or change it at your hotel. It’s even better if you can change it in the bank. 2) Change a small amount in case you need to pay a taxi or something that you can only pay in colones.

If you are coming for 2 weeks, you can change a bigger amount that you estimate will cover your expenses. If you don’t have time to go to the bank, you can do one transaction at the ATM. Remember that your credit or debit card will usually charge you a commission for this.

In tiny towns or rural areas, most of the places only accept cash. If you are planning to visit small areas, it is always important to carry some cash—preferrably small amounts.

ATMs also have been used to hide chips that can still your personal information, so make sure to review the card entrance. If you don’t feel sure, just try a different one.

To summarize, if you don’t want to be hit by the currency exchange as much, try to exchange a bigger amount and later try to pay with card or colones so at the end you don’t end your trip with a bunch of colones that later you will have to convert back to dollars.