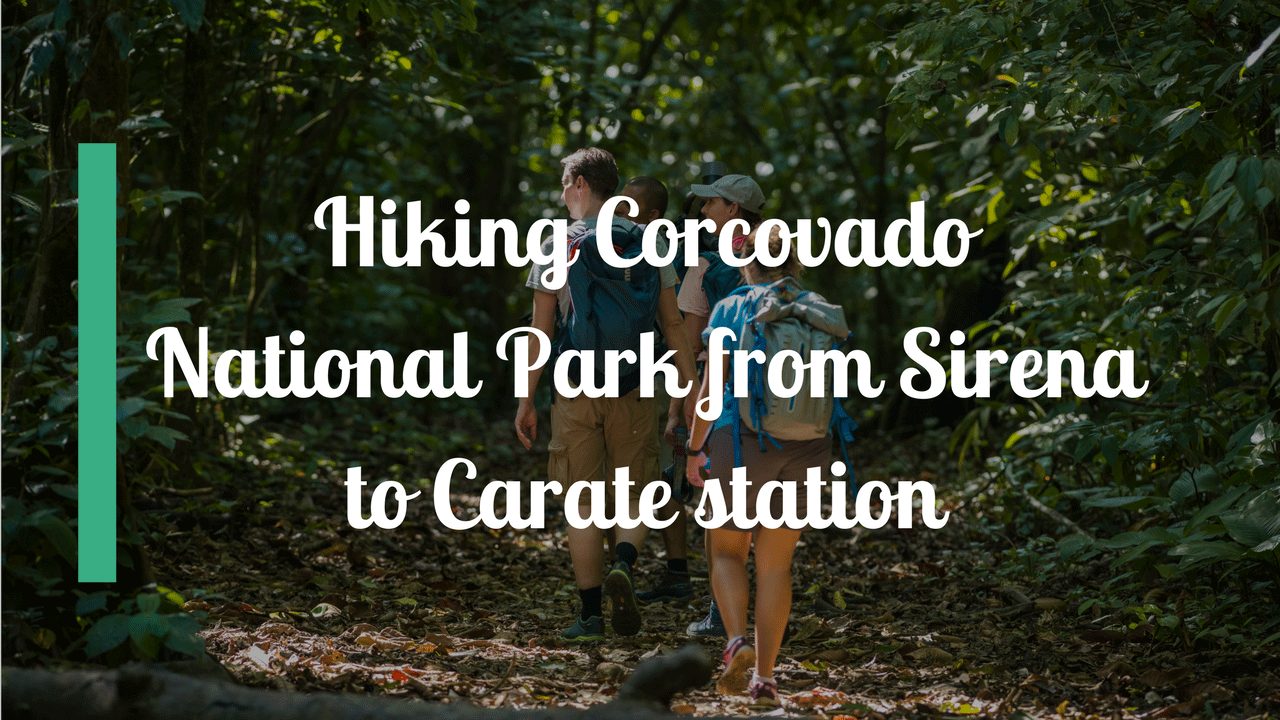 After you travel to someplace … Have you ever felt it was a dream? Did I really go there?

Well, to me, Corcovado National Park feels like that sort of memory. I’m still processing that we’ve been there. Especially because you get to this stage of consciousness after immersing yourself in such a natural and wild environment. Corcovado National Park made my brain start working more harmoniously and helped me develop a better understanding of how tiny I am in front of this majesty of nature.

I would like to make this blog a sort of diary entry to remember those memories after our first visit to Corcovado National Park. But also, the purpose of this post is to give you an idea of the hiking that we did from Sirena Ranger Station to Carate.

Rodrigo and I decided to give ourselves a different hiking challenge every year. Check our 2017 challenge to Chirripo. Corcovado was our 2018 challenge.

Friday, February 2nd… It takes some effort to get there

We left San Ramon early that day and drove to Dominical.

We had met a Dutch couple who came to Costa Rica and met each other through Instagram, and they were looking to visit Corcovado National Park, so we decided to do this adventure together. So we picked them up in Dominical and had breakfast with them.

Then we drove for about an hour more to Sierpe, where we needed to catch the boat that would take the four of us to Drake Bay. Click here if you want to learn more.

We had a nice boat ride with a lot of nature on the river and the “bocana” (how locals call the part where the river mix with the ocean).

Upon our arrival in Drake Bay, we met a friend of Rodrigo and also our guide for our trip to Corcovado National Park: Elberth of Nativos Corcovado. Sigrid and Francois (the Dutch couple) checked into the rooms and we said goodbye until we started our adventure the next day.

6:30 am: We made our way to the Beach in Drake Bay. There was a lot of enthusiasm in the environment from tourists and locals that provide services. We sailed for about one hour into the national park. Fortunately, the sea was calm. Once we were in the park, there was literally no infrastructure more than the Corcovado sign. Personally, I found that really nice.

So here we are with excitement ready to start exploring the jungle!

We had maybe 30 minutes walking when we found ourselves immersed in a trail where every step, Elberth was pointing out a new animal. We were able to see 3 of the 4 species of monkeys in Costa Rica:  howler monkeys, spider monkeys, and squirrel monkeys. They were very nice to see.

I hadn’t seen the “titis” (squirrel monkeys) since I was little. This species is the smallest in size in the country. 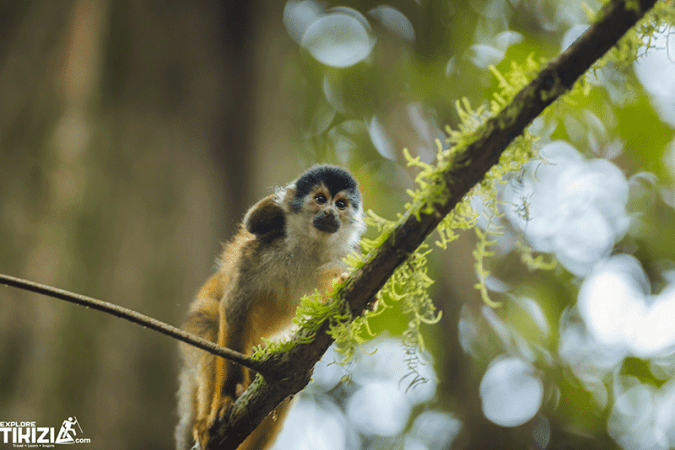 Because it was the mating season of many species, we saw a lot of birds singing and calling the attention of the females. We also saw monkey mommas with their babies. So cute!!!!

12:00 pm: It was hot and I was hungry (as always) … we walked toward La Sirena, one of the ranger stations in Corcovado National Park and the place where we would spend the night.

This ranger station is really in the middle of the jungle. After lunch and a short break, we went back to the park with the five of us.

One of the coolest parts of the second part of the hike was when the whole neighborhood started the alarm because there was a Puma in the area.

My heart was beating faster because of the mix of feelings—on one hand, I want to see the puma, but on the other hand, I didn’t know what we would do if we faced him.

Still, our friend Puma sneaked out, but let me tell you, it was one of the coolest experiences just knowing that he was around.

Then it was time for dinner and bed since they shut down the power at the ranger station around 8:00 pm. They have Wi-Fi, but since were many people in the station the signal is pretty weak.

I’m a light sleeper, so I didn’t sleep too well that night (remember the number of noises: farts, snores, and people walking around. Yes, you share more than a room and the people’s sleep secrets).

A quick funny story is when an Italian couple was walking around the station. Apparently, a tour guide was camping outside of the station and his snores were beyond anything that I have heard, I swear!!!  The couple thought that it was an animal and they were telling me to be careful. I explained to them that the animal wasn’t exactly an animal. We all started cracking up.

Meanwhile, Rodrigo saw a tapir walking with a baby in front of the ranger station! I was so jealous!

5:30 am That morning we did an amazing trip. It was raining at the beginning and I didn’t tell anyone, but in a part when we had to cross a river, I was a little scared. I was thinking “Great. Crocodiles and sharks live in these waters. Oh well, I want adventure!”

Fortunately, everything is about attitude, and Elberth found a narrower space where we crossed the river without problems!

Tip: Light dry-fit clothes are very important for this hike.

The trail switches from the jungle to the beach and vice-versa. At the beach, we found many traces of a tapir. Finally, we saw it lying, pretty relaxed at the beach! It was my first time seeing a tapir in the wild. 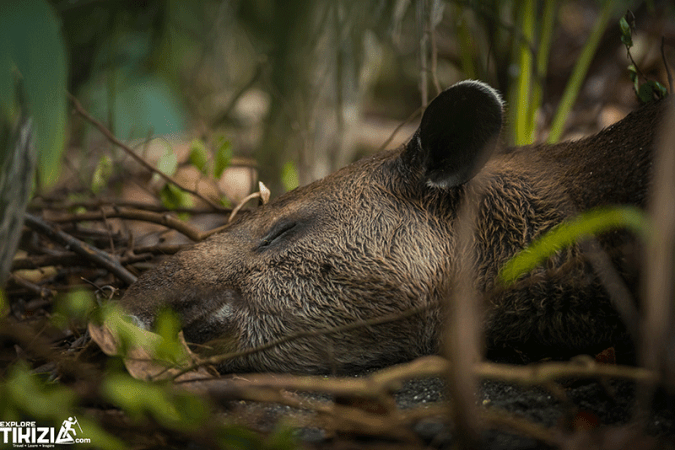 “Salsipuedes” – Second part of the hike

It was around noon, the sun was pretty heavy, humidity was a real thing, but Elberth said we were close. So we were walking on the beach and rocks!

The beach was beautiful. The contrast of the green jungle and the blue ocean was magical. We saw 2 couples of scarlet macaws that danced for us, letting us take pretty nice pictures.

I felt the anteaters was one of the species that we were very lucky to see. We saw 3 of them on the whole trail. 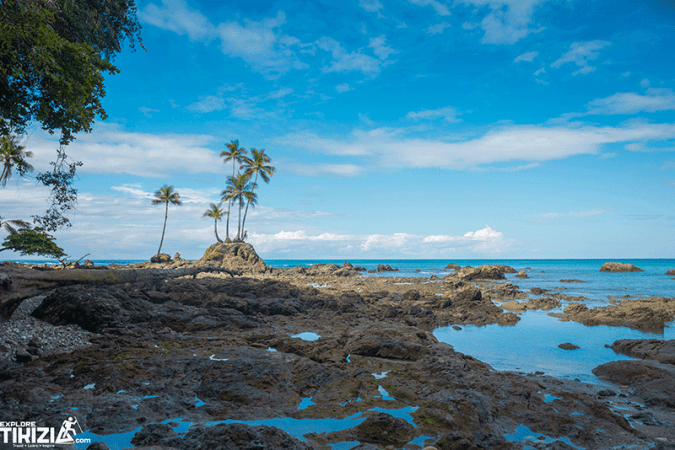 1:00 pm: We got to La Leona Ranger station, where you sign up saying that you are leaving the park. The station has water and bathrooms. It’s perfect to eat a snack. I washed my tennis shoes from the sand but I wished I brought shoes more like sandals or “chacos”.

We chat with some other tourists who showed us  pictures of the Puma they saw. Well for us, not this time, but we were close.

Tip: Use shoes that are easy to wash and dry fast. Also, make sure to bring enough snacks for the whole trip.

We walked around 1 hour and a half more until we got to Carate. There was not a building there either but just a few places to buy some drinks!!!

At this point, all that I wanted was a Coke! It’s one of the few times that happened to me. So we cheer our drinks and check our 23 kilometers that our clocks marked, with a rewarding feeling of accomplishment! 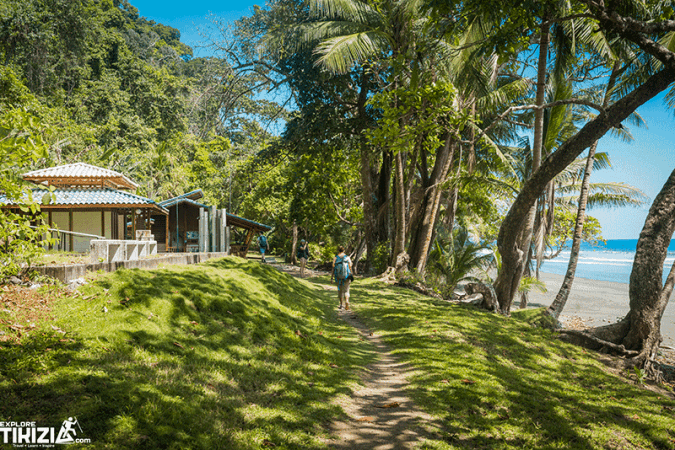 We left Carate around 2:30 pm and got to Drake Bay around 6:30 pm. The total time it took us for the hike was 8 hours. We stopped a lot taking pictures, but apparently, we still did it in the average time.

We know that some people do the walk the opposite direction than we did. They leave Carate first then to go to Sirena and spend the night there and then go back to Carate and stay near the Puerto Jimenez area. So that’s another possibility for people who want to do the hike.

I am definitely happy to share this experience with you. Thanks for reading! If you make it until here I just want you to know that I hope you can have many experiences in nature like the one in Corcovado National Park.

I realized while I was doing my research to go to Corcovado that only 1% of Costa Ricans have gone to this park. So we are glad to see the statistic and know that we were there.

At the same time, I know this won’t be my last time. There is so much more to explore there.

I want to end the blog with our Dutch friends’ thoughts about Corcovado National Park. They have traveled a lot around the world so I feel honored about what they said.

I will quote what Sigrid wrote in her blog, because it is so true:

Corcovado National Park is ultimately one of the most beautiful wildlife experiences we have ever experienced. You can see so many wild animals here and nature is so beautiful. Many people skip this park during a trip through Costa Rica, because it is so remote, but I can only say: Go! Do not miss this special place. You will have no regret!  – Sigrid, Mytravelecret

So, if you are planning to come to Costa Rica, there is an option to add to your itinerary!! Pura Vida!