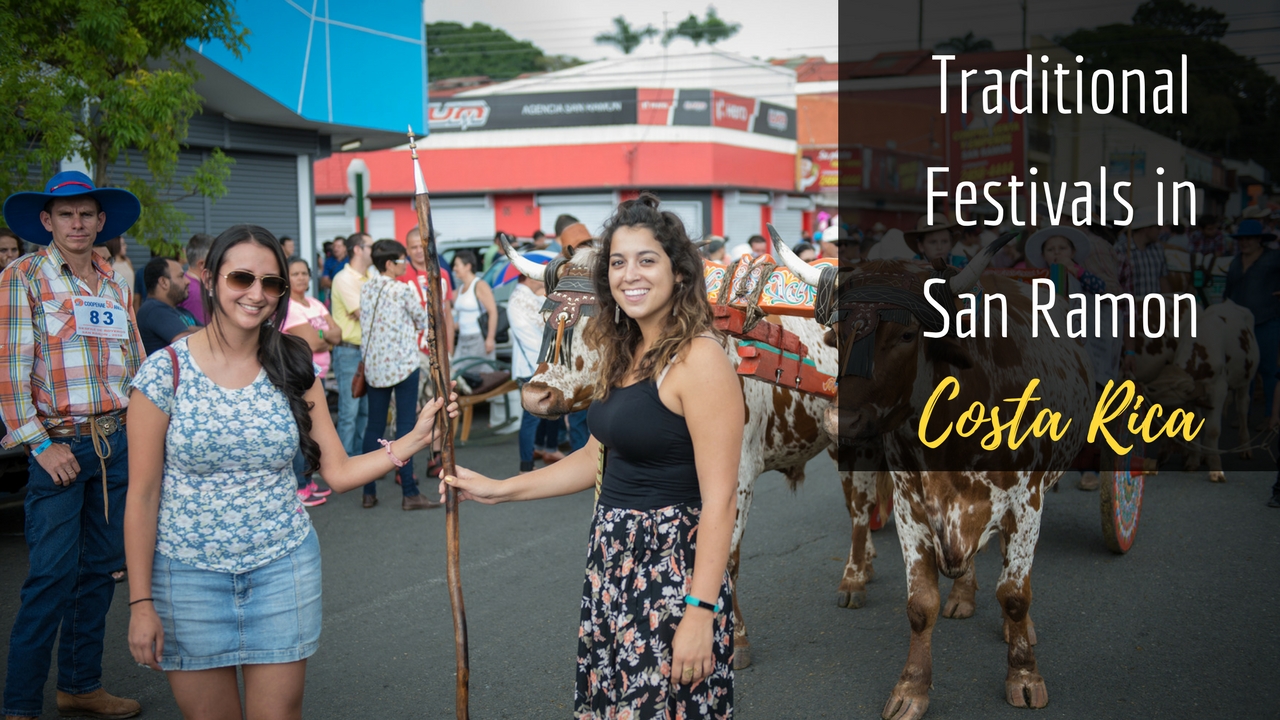 San Ramon is one of those towns that keeps a lot of the traditions of Costa Rican culture.

Traditional festivals in Costa Rica have already started, and they make me realize how much people from San Ramon enjoy this time of the year.

It means a time where the families will hang out together, and friends and visitors from other areas will be here.

One of the main aspects that represent a culture is the festivals and social interactions in a town. Good music, food and traditions are some of the greatest ways to dive into a culture.

Costa Rica has holidays and festivals all year round in different towns through the country. There are religious festivals, music and art festivals, historical festivals and food festivals in Costa Rica.

Sometimes they are organized by the local communities to keep traditions alive and help the local economy, since people come from all over to participate.

There are three main festivals in Costa Rica during the year that are a good sample of our culture:

How did the festival start?

The story goes that on August 2 in the year of 1635, Juana Pereira found a rock with the shape of the Virgin Mary while she was collecting wood in the forest. She took the rock home and it disappeared. The event repeated again the next day.

So Juana decided to tell her mom what happened, Her mother took her to the local priest, who asked for the rock with the Virgin Mary shape. BUT the rock disappeared again. So the priest asked Juana where to find the rock and he told another priest that they should build a church in that place. They called the place “La Negrita” because of the color of the rock.

What happens during the festival?

During this festival, many people walk from San Jose to Cartago, to the Basilica Los Angeles—the church on the spot where the rock was found.

The main festival pilgrimage usually starts in San Jose on August 1. However, here in San Ramon, we have a district called Los Angeles, so the tradition has been to visit the church there and see the Virgin Mary they have there.

The traditional experience of this festival has also changed over the years. You will see some devoted Catholics who celebrate the festival with faith. But then there will be people who will look more they are going to a party—they’ll be drinking and partying with coolers full of beer.

This is why I included this as part of the cultural experience of festivals in Costa Rica—you will see a lot of locals living the same celebration in different ways.

How did this festival start?

The tradition of this festival started 169 years ago, and it represents pretty well what means be a “moncheño” (a person from San Ramon, Costa Rica).  The names of the towns are related to the name of a saint since Costa Rica is a Catholic country. So, in San Ramon, we celebrate Saint Ramon from Cataluña every year on August 31st.

What happens during the 2 weeks of the festival?

Year after year, San Ramon prepares the building of what we call “Ranchos” around the park. After that, the festival is divided into different areas. The main stage in front of the church always has live music and artistic performances, local cuisine, local arts and other activities.

There are 2 main days you may want to attend the festival:

Usually, the festival has a daily program with music on the main stage including the activities that I just mentioned. It’s a very cultural experience. You will see a town alive with a lot of people, families, and youth also involved in the traditions. It’s the time of the year where people that live far come and visit their families and share in the festival.

My best memories of my child/teen years are from this 2 weeks of the year. So if you are planning to visit San Ramon, Costa Rica, consider coming during the last 2 weeks in August. 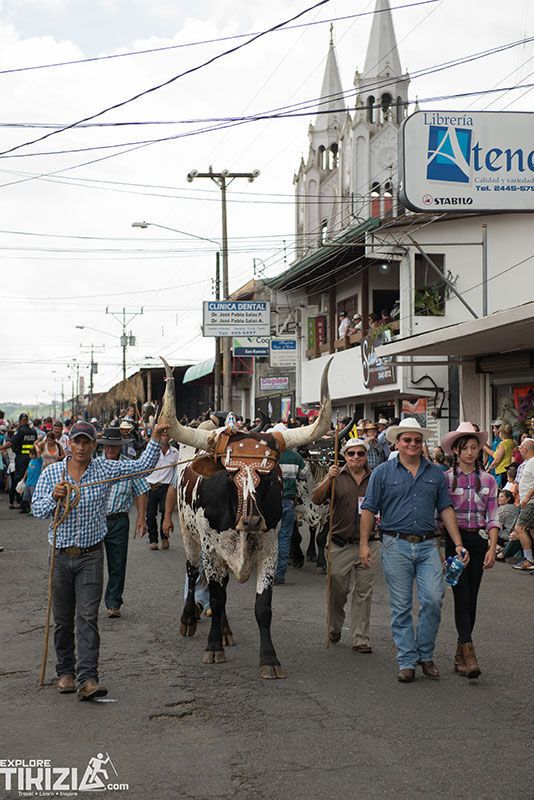 How did the festival start?

This is a really cool tradition that is unique to San Ramon. The festival involves passing out pieces of sugar cane candy (“melcochas”). The story behind the “melcochas” is related to the celebration in the Catholic church.

The immaculate conception of the Virgin Mary, which is celebrated December 8th.

The tradition of melcochas was born in the house of an elderly lady in Bajo La Paz, an area that is well known for sugar cane production. Paula Mesén prepared some candies in order to honor her neighbor Maria Vargas.

She prepared the candies wrapped in lemon leaves, and when kids came to her house, she started tossing the candies to the kids, asking, “What is this joy?” And they replied, “Las Melcochas de Maria!!!!”

The festival is usually organized by the municipality and private houses that contribute to toss 10,000 pieces of the sugar cane candy (“Melcochas”) out to the crowds below. All ages participate running on the streets to get the candies.

What happens during the festival?

The activity starts in the park. People start to run to the houses of the ladies in town who are named Maria. They throw candies to the crowds, and when they are done, the crowd runs to another house. Some tourists call this “Mini Halloween Tico” because of the similarity of kids asking for candy at each house.

The tradition represents the beginning of Christmas festivities. With the characteristic winds of December, it also means to us that the rain is leaving to let the dry season begin.

What do locals think about traditional festivals in Costa Rica?

We think they are really important because they represent the union of the family. Costa Rica culture is very family-oriented, so it’s pretty great to see mothers, fathers and kids participating and enjoying these festivals in Costa Rica.

The festivals usually have a religious background. But they are also an important part of helping rescue values in society, such as family and also the traditions. The little ones get to learn these traditions and values by participating.

So Costa Ricans enjoy these festivals a lot and hope the traditions never die!

Whether you’re a local, new in town, or just passing through. Be sure to find some time to get to know locals and their traditions.

When we have tourists in town that decide to spend some time in the festivals, it shows honor and respect for our culture. We admire it when someone shows such interest to understand our traditions!!! 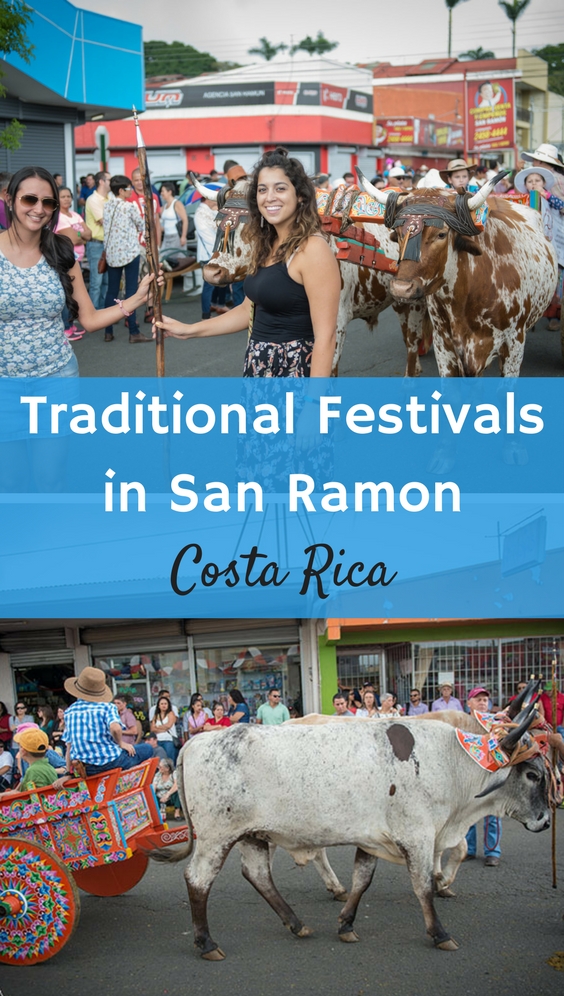