Rio Celeste: A waterfall and its light blue waters

This. Waterfall. is. light blue

We have visited the Rio Celeste waterfall several times. One time we went there with no luck to see the stunning color.

But this time was one of the nicest because of the time of the year (February). The color that you can see is like the pictures. LIGHT BLUE 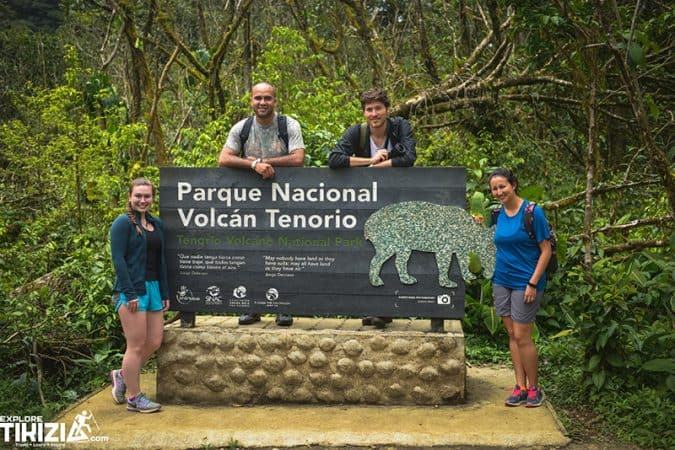 First of all, here’s some general information about the place that we have researched and compiled for a better understanding of this tourist attraction:

A little of the history

Rio Celeste waterfall is part of Tenorio Volcano conservation area. The Tenorio Volcano has been dormant for thousands of years.
So, in the tradition of the indigenous Corobicí (a group that has disappeared) and Malekus peoples, several of the rivers and lakes that flow from Tenorio are considered sacred sites.
The Malekus live on the plains of Guatuso. They consider this “big house,” stretching to the south of Lake Nicaragua, to be the home of gods, with each god controlling a strip of land between rivers. The sacred sites are now protected areas. 1

Personally, when I am in the forest, I get immersed in my thoughts and I just picture our ancestors walking in the forest, exploring new territories and finding a waterfall like Rio Celeste!!! WAOOO! What a moment!!!

Brian, and Morgan from Boston plus Rodrigo and I spent the night in La Fortuna. In the morning, we left around 6:00 am and got the Rio Celeste entrance around 8:00 am.

When we got there we had a quick chat with the guard of the restaurant outside of the entrance of the National Park. He told us about the series of earthquakes that happened in January and the repercussion on the color of the water and tourism on the area.

Fortunately, at the entrance, they told us that the river was blue. So we were ready and excited to see the waterfall. We started hiking, and maybe one kilometer later, Rodrigo saw a small snake. A lot of curious tourists came by and we definitely noticed a lot of people walking on the trail.

We had a very rough rainy season last year, and you can see a lot of trees that have fallen and the forest regenerating itself. However, the trail called “Los misterios de Tenorio” was in perfect shape. 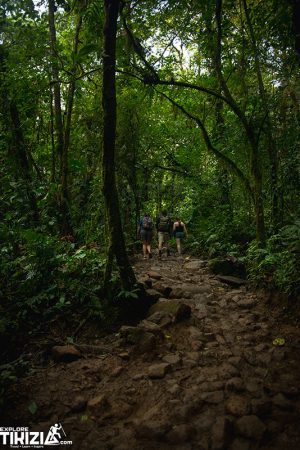 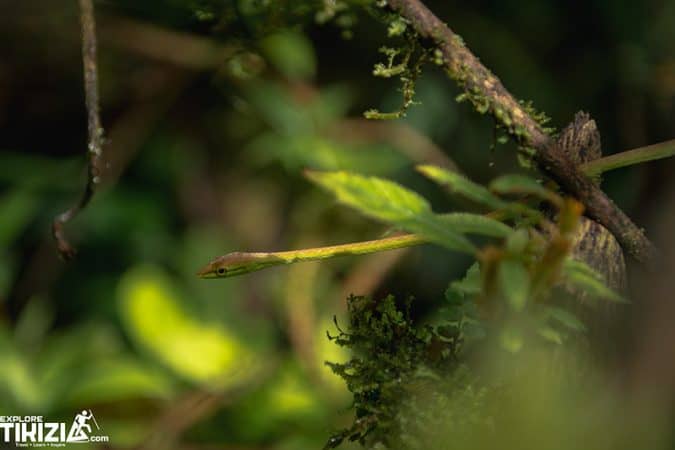 Getting to the Waterfall

First, we went to the trail that has a lot of stairs to see the waterfall. The weather was really nice—not too sunny not too cloudy.

We took as many pictures as we could. And I reaized that nothing makes me happier than seeing the faces of admiration when the tourists see the waterfall. 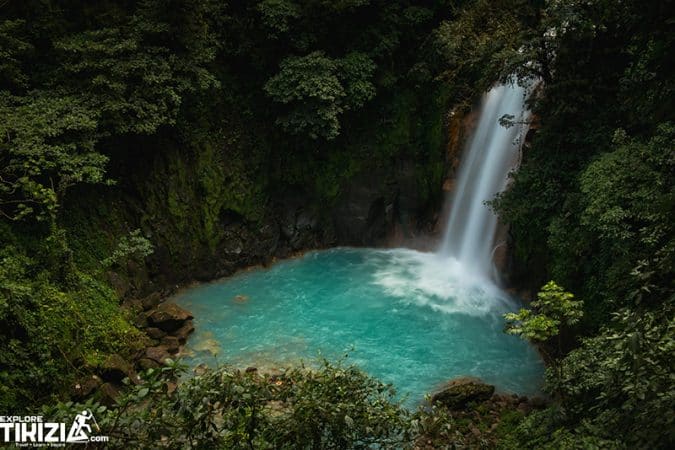 Later, we continued walking up to the “Mirador” after having some snacks. There were a lot of people going up and the trails get muddy even though it was the dry season. But it wasn’t too bad. Well… Rodrigo did fall and cover his butt with mud. If you’re visiting Rio Celeste in the rainy season, it will be impossible stay clean by the end of the day. But hey, it won’t be fun if you don’t get muddy.

There were no clouds, so we were able to see the Tenorio Volcano from the viewpoint. After this part, you start going down on the trail. 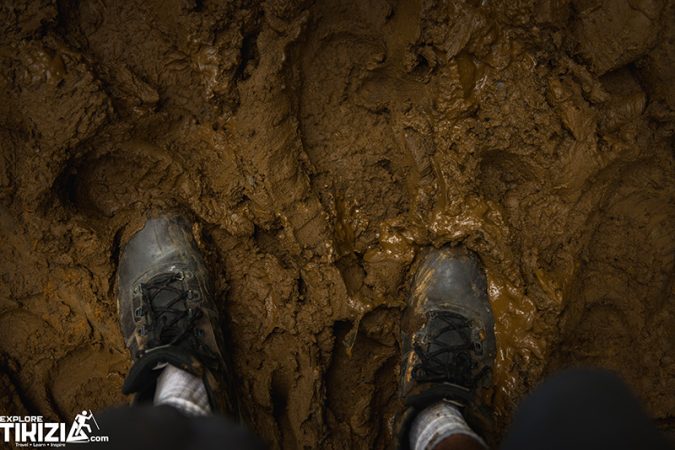 This area is nice because the river has this color and you see the contrast of the green vegetation surrounding it. It is like a fairytale landscape.

Following the trail, you will get to this section, where you see the river bubbles due to the sulfur and the temperature of the water is warm. In this part, there is a strong smell like a rotten egg. 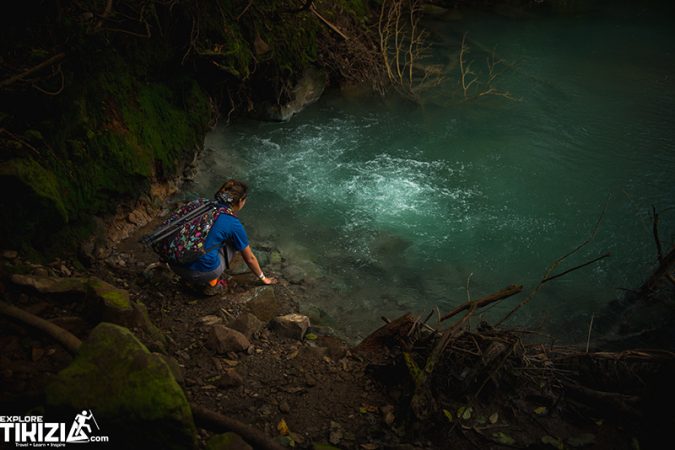 Here is where the magic happens. Here is where Rio Buena Vista (Good View River) and Rio Quebrada Agria (Sour River) combine together and the color of the water changes drastically. The water goes down for 14 kilometers more.

According to an article from the University of Costa Rica, the scientific team collected a water sample from here and took it to a lab. They noticed that the color of the water was only in the river—in the tubes, the water became transparent again.

As a result of this investigation, they discovered that the light blue color we see in the waters of the river is not a chemical phenomenon, but an optical one. That is to say that the celestial blue color is not produced by a chemical that colors the water, but rather it is a perception of the human eye because of the way the water disperses the sunlight.

At the end of the trail, after we’d taken some videos, Morgan and I had to run because we really needed to use the restroom. Plus, we were starving, so we did that trail in like 30 minutes. haha. The good thing is that while we waited for the guys, I had the chance to interview Adriana Chavarria, one of the rangers at the national park.

In the next section, I’ve written common questions about visiting Rio Celeste. Some were answered by Adriana when we talked that day, other by experience and other as part of the research. Hope you find these useful! 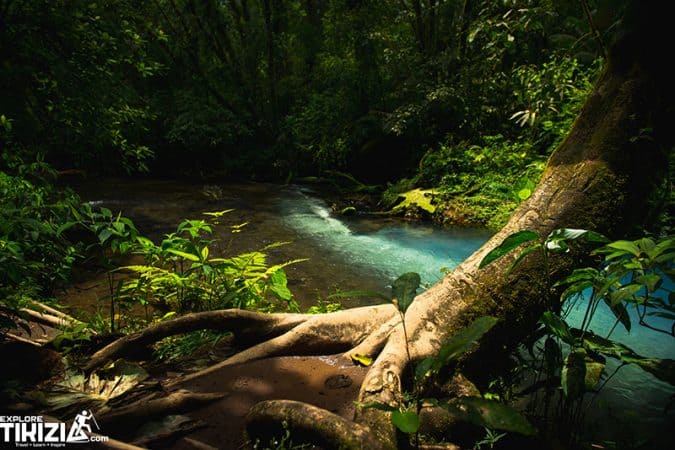 Common questions about your visit to Rio Celeste

1. Trails: I’ve heard this hike is ‘intense’—does that mean lots of hills and elevation changes? Or just ‘careful’ stepping? Is it physically difficult?

Everything depends on what your health conditions are. A few years ago, when I wasn’t hiking as much, I found this hike pretty exhausting. Especially in the rainy season because the mud and the rocks are pretty slippery. There is an elevation change but it is a slow progression up. I wouldn’t say it’s “intense,” but it will be challenging for some.

You don’t need to be an athletic person to see the waterfall. Some people see it from the top of the stairs and skip the rest of the trail. You can do the trail at your own pace and take plenty of rest breaks.

The trail round trip is 6 kilometers (3.7 miles) and takes between 3 – 4 hours. The trail is not handicap friendly.

2. Q: How long is the hike to the waterfall?

We did this backward because we went first to the waterfall and then to the farthest point. So Adriana recommended that next time, we go first to Teñideros and leave the waterfall on the way back as the reward after the long hike.

If you are just interested to go to the waterfall, it will take 1.5 kilometers to get there ( Almost a mile + 250 steps). Depending on the speed, it takes around an hour to get just to the waterfall.

The weather is humid, and it’s in the rainforest, so it rains a lot. Dry-fit clothes will be best.  During the dry season, you can use hiking shoes that you don’t mind getting muddy. They also rent out rubber boots at the entrance, although some people find them very slippery.

I saw some people with Keen sandals or Chacos. I guess they didn’t mind the mud, the rocks, and the tree branches. Just use what makes you walk more freely. Please DO NOT use flip-flops or white shoes. We saw many people walking barefoot after they broke their flip-flops.

4. Q: Swimming: I have seen videos of people swimming in the waterfall. Can you swim there?

Well, unfortunately not anymore. Swimming inside the National Park is forbidden.

The reason was some tourist drowned because the current was so strong, so the park decided to avoid more accidents.

However, Adriana explained to us about a spot where people go to swim before the main entrance of the park—around 3 kilometers away. Under the bridge is the Catira River, which has the same color and you can swim there carefully, especially in the rainy season.

5. Q: Parking lot: Is there any place for parking? And is it safe?

Yes. There are two restaurants in the main entrance. We parked in the one across the street from the entrance and paid 2000 colones ($4 for the day).

Yes, you can, especially if you are staying in La Fortuna.

Also, the area offers places to stay and explore the area more. At the same time, the community in the surrounding areas benefits from the tourist activity.

If you decide to stay, it will give you the chance to get to the park earlier and enjoy more of the wildlife.

In the high season, they have a limit of 400 people on the trail, so sometimes you might have to wait.

Yes, it affects it and changes it to a brownish color. For that reason, we recommend checking the official Facebook page of the National Park to double-check if the park will be open or  the color of the water and if is worth it to go.

To conclude, I would like to add the last question that I asked Adriana that day at the ranger station.

Because even with the magic of this place, it is important to not ignore the CHALLENGES that places like Rio Celeste face every day that we don’t even notice. Superheroes like volunteers, rangers (only 5 for such a big area) and the local community that depends on tourism fight every day against these issues.

8. Q: Can you mention the main issues that the National Park has to deal with?

In conclusion, this hike is 100% recommended. Rio Celeste is a place where you will recharge your energy and feel a peace in your soul.

I want also leave space to reflect more than the pictures the impact that you do when you visit a place like Rio Celeste. You are supporting nature, and boosting the local economy with your footprint and watching the light-blue water.