When I (Ligia) was growing up, my family learned the hard way to be more mindful about what we put in our bodies. After my dad’s health problems, organic food became very important for our family. Although, of course, it can be quite challenging to eat EVERYTHING organic.

However, Rodrigo and I try to be more mindful about what we eat. We try to learn about the producers of the food we buy. About a year ago, we, along with my parents, joined an association of organic farmers’ families.

At those meetings, we met a family that has an interesting project producing organic coffee. They have a farm with 35 hectares (86 acres) of land, called Finca Edgar Fernandez, surrounded by peace, nature, and life.

Let me introduce you to Edgar Fernández, his wife Maria Elia, and his two children: Viviana and Richard (They are in their 20’s, so not children anymore :).

Together, they have been hard at work, growing coffee their entire lives, as it has been a tradition of the family for generations.

From an early age, he (I like calling him Don Edgar or Mr. Edgar in English) grew up as an agriculture farmer and didn’t have the opportunity to finish school.

Hard work and consistency have been the best words to describe him.

In his earlier years, Don Edgar produced coffee in the traditional way using a lot of pesticides.

Coffee farmers thought in the past that producing organic was nearly impossible. Mainly because of fungus diseases like “Ojo de Gallo” and “Roya”.

However, Don Edgar decided to get more knowledge through a program from the Coffee Institute of Costa Rica, and learn how to create systems and produce organic coffee.

After Don Edgar adopted organic practices for producing coffee, the approach turned him and his family into an example to others. Eventually, it led to them being taken by Nesspreso to Switzerland in 2013!

In 2006, they became part of a program of sustainability for families and small farmers, who evaluated farms and reviewed the way they do things.

After this process, they received support and more information to improve the practices of the sustainable program. They also explained how thankful they are for the training in accountability to see if they were generating income or loss from their coffee production.

Then, in 2012, they got the news that an important visitor was interested in learning about the way they produce coffee and their sustainable lifestyle. Well, he turned out to be George Clooney!!!

For them, it was such an honor to have him there and to share their practices with him.

My favorite part of the story is when the school soccer field was used as the landing space for Clooney´s helicopter. Maria Elia laughs, saying that everyone was in shock seeing the helicopter and ran out of the house in their pajamas.

She didn’t realize who he was until 15 minutes later when her son told her! 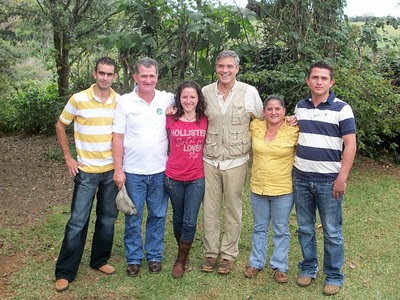 Why did they decide on this lifestyle?

When you walk around the property, you find more than just the organic coffee. You will see all different varieties of organic fruits and vegetables growing that the family produces.

They have a Biodigester to produce their own gas, and their tap water is all connected to a cycle that gets filtered and recycled for their gardens.

Don Edgar says they always had the desire to learn and live in harmony with the environment.

Here I’ve quoted some words from him that have stuck in my head:

“We are administrators of the natural resources that God provided to us, such as food and good quality of life… if we don’t take care of nature, we lose more because nature works in this way: if you take care of her (nature) she will take care of you. I protect it and she always gave enough to live a good life. I don’t need much in life.” – Edgar Fernandez

Hearing his deep understanding of nature and his passion for producing sustainably and responsibly for our planet is truly inspiring.

They started the tour program back in 2006, and since then, many people from Europe and other countries around the world have come to learn the process behind the organic coffee bean.

So this year, Explore Tikizia decided to organize a group of volunteers and friends to let them try out a different kind of coffee tour.

We had a great time! It feels more like visiting a family house than a super fancy tour, but still, we learned a lot.

The family would love to get more visitors so they can keep investing in their organic farm, using the extra income they make from the tours.

They are learning more every day, and we are willing to create a partnership with them to promote more this kind of tour. 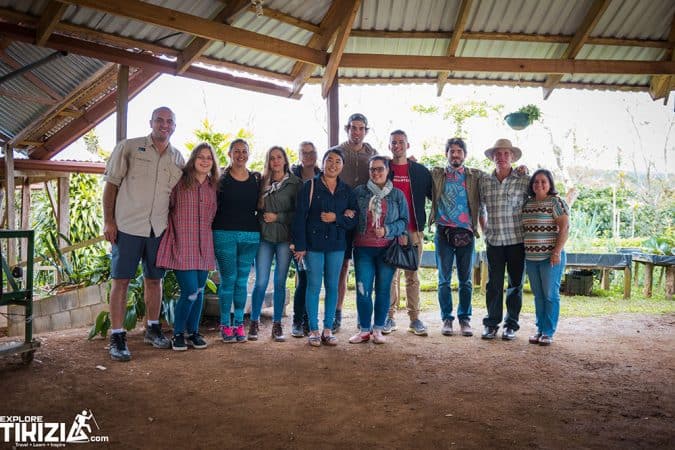 Things you can see on the farm: 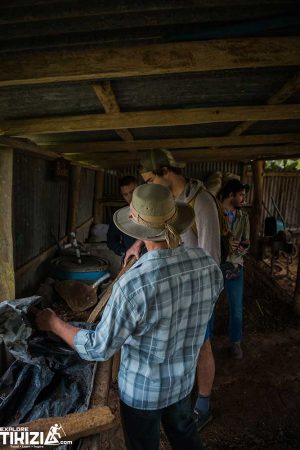 When they produce more than what they need, they will share with their neighbors, trying to keep the value of cooperation. 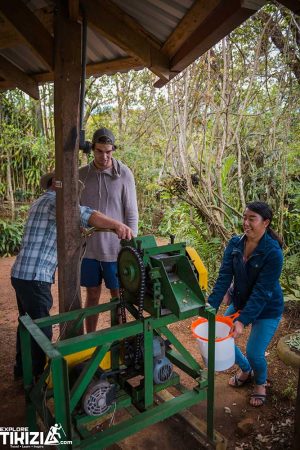 On the tour, you will learn the whole coffee production process from the bean stage to the warm cup in your hand. You’ll also learn about common diseases the plants face and other interesting information. 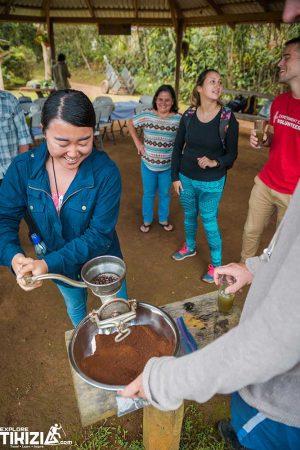 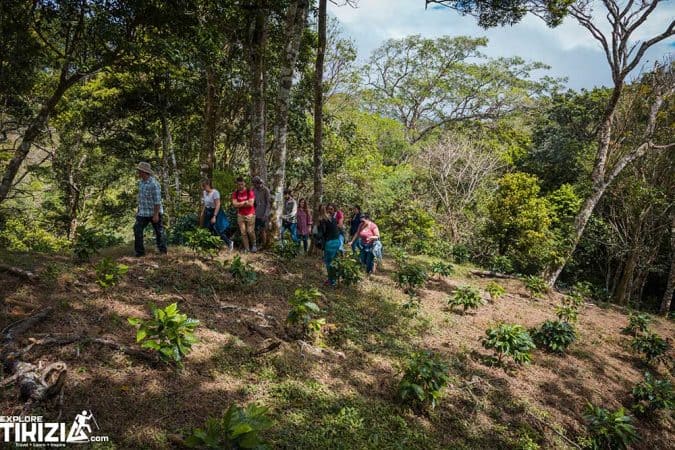 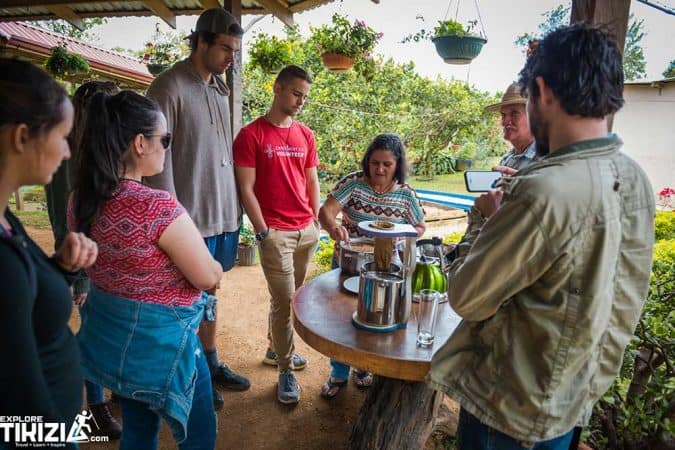 All prices are per-person. You can pay in $ or colones to the currency exchange. No credit cards, only cash.

The coffee tour takes around 2 hours, but they are flexible if people want to stay longer and learn more.

By Car: If you are coming from San José:

By bus: If you’re coming from San José, take the bus to San Ramón to the bus stop called “Parada de Puntarenas” or “Empresarios Unidos.” The ride takes an hour and a half, depending on traffic.

Once you are in San Ramon, the local bus stop is just less than a block away. From there, the bus leaves to Piedades Sur.

The high school is the last stop on the bus, which is where you get off. You can arrange in advance to be picked up there by one member of the family or take a taxi from there. There are “informal taxis,” according to María Elia, which people from the community use frequently.

Private transportation: As locals ourselves, we can help you to arrange this. We have contacts who can definitely help you get there without the process of figuring out Costa Rican addresses and routes.

Note: She only speaks Spanish, but her daughter speaks fluent English. We can help you to set up the visit in case you need help. 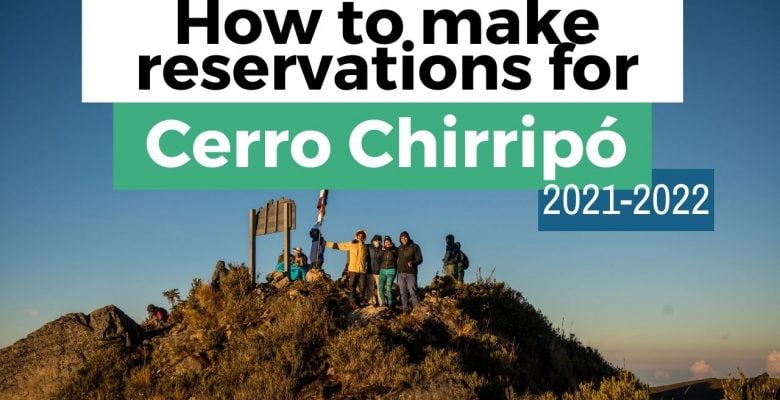 Updated: October 2021 Cerro Chirripó in Costa Rica is the highest mountain with an altitude of …